This is a talk at Set Theory Day, a one-day conference held at the CUNY Graduate Center in honor of Joel David Hamkins’s 50th birthday, on 11 March 2016.

I will be speaking about some recent work of mine on models of Kelley-Morse set theory. The jumping-off point for my work is the following well-known theorem, independently due to Shepherdson and Cohen.

This least transitive model is namely the least $L_\alpha$ which is a model of set theory.

It’s not terribly difficult to see that this theorem can be generalized to more than ZFC. In particular, exactly the same proof carries through for any extension of ZFC which is absolute to $L$.

Proof: This model is the least $L_\alpha$ for which there is a model of $T$ of height $\alpha$. ∎

However, this result cannot be generalized to all extensions of ZFC. In particular, it fails for theories which assert the existence of large cardinals with a sufficiently strong embedding characterization.

Proposition There is no least transitive model of ZFC + there is a measurable cardinal.

Proof: Suppose otherwise that $N$ were least. Consider the elementary embedding $j : N \to M$ associated with a measurable cardinal in $N$. By elementarity, $M$ is a model of ZFC + there is a measurable. However, $M$ is strictly contained in $N$. ∎

Shepherdson already answered the question for Gödel-Bernays set theory. Recall that GBC is the second-order set theory consisting of ZFC for the first-order part along with Extensionality for classes, Class Replacement asserting that images of sets under class functions are sets, Global Choice asserting the existence of a global well-order, and the Comprehension schema which asserts the existence of classes definable via first-order formulae, possibly with class parameters. (Shepherdson didn’t include Global Choice in his axiomatization, but noting that he proved the question for GBC is just noting that $L$ has a definable global well-order.)

Theorem There is a least transitive model of GBC.

The main result I will present in my talk is that the analogous question has a negative answer for Kelley-Morse set theory. KM is like GBC but the Comprehension schema is strengthened to allow formulae with class quantifiers. This gives us a much stronger theory. For instance, KM proves Con(ZFC) whereas GBC is conservative over ZFC.

Theorem There is no least transitive model of KM.

A second notion of minimality I consider is being the least second-order model with a fixed first-order part. Due to time constraints, however, I will say little about the following results during my talk.

There is a precise characterization of when a countable model of ZFC has a least GBC-realization.

Theorem A countable model of ZFC has a least GBC-realization if and only if it has a definable (possibly with parameters) global well-order.

This gives us a first-order characterization of the countable models of ZFC with a least GBC-realization as having a definable global well-order is equivalent to being a model of $\exists x\ V = \mathrm{HOD}(x)$ where $\mathrm{HOD}(x)$ is the class of sets which are hereditarily definable from ordinals and x.

For KM, we get that there are never least KM-realizations for countable models of ZFC.

Theorem No countable model of ZFC has a least KM-realization. 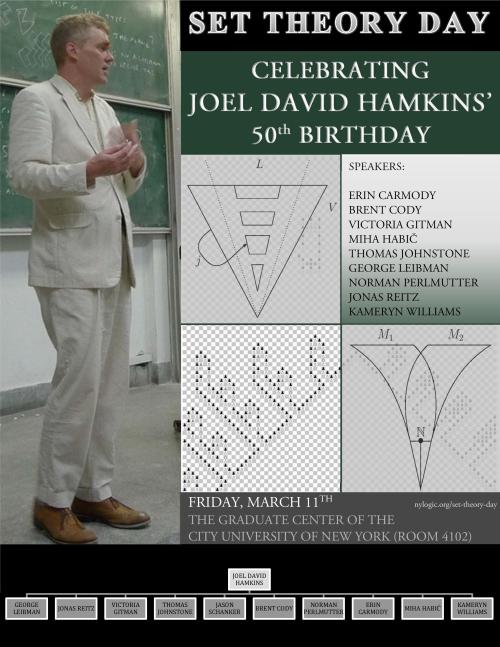 (The poster for the conference was made by Erin Carmody, Joel’s most recently graduated student. At the time of the conference, she had a position at Nebraska Wesleyan.)